Hi everyone! I’m Juho “Tanan” Auer and this is my first warmachine miniature game battle report on this site. I hope you enjoy it. The lists below where done using www.forwardkommander.com .

Killbox is in effect: Starting at the end of 2nd players 2nd turn, your warcaster must be 14" away from any table edge, or opponent gets two control points.

About the lists:
The basic idea behind my list is pretty simple. Blasters are incredible models, because they hard counter infantry and are one of the most durable models in the game for their point cost. The durability and firepower of Blasters buys me time to annihilate key enemy models and either win by attrition or scenario control points. In Privateer Press Mercenary Faction Forum, this list type is called "Miserable Metal Mountain" or MiMeMo. Thanks @Althrion for coming up with the term. 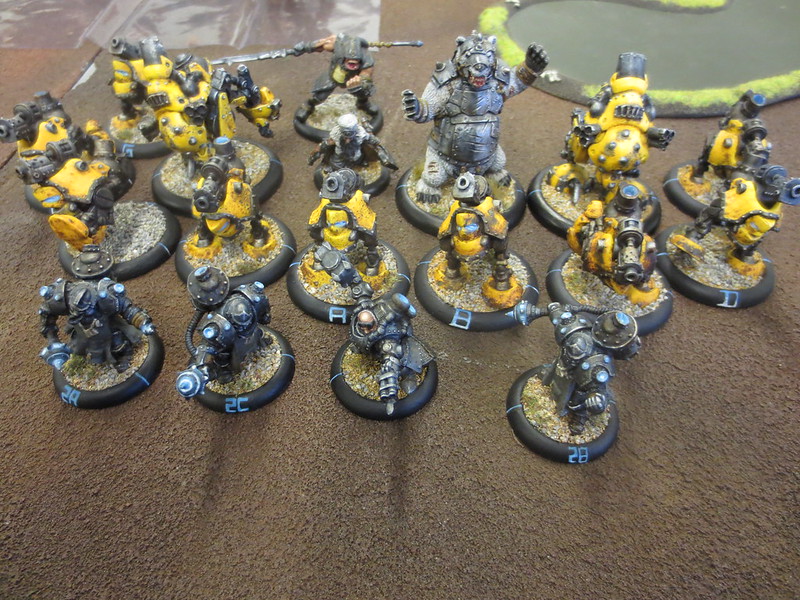 Niko's Khador list is basically a one big gunline. Vlad's Signs & Portents (S&P) spell and Kovnik Jozef Grigorovich makes everything very accurate and hard hitting. Lady Aiyana spell Kiss of Lyliss increases the damage even further. While my jacks are immune blast damage, Gudrun and Tactical Arcanist Corps can be seriously hurt by S&P buffed blast damage from Mortars and Behemoth. Luckily for me, Gorten's Solid Ground spell makes the nearby models immune to blast damage. Another advance of Solid Ground is that the Winter Guard Field Gun Crew can't knock them down (53.32% to crit with S&P and Joe vs. DEF12).
The ensuring melee against the Khador will be very interesting. The two Khador warjacs are good at wrecking armored models in melee. On the other hand, the Blasters are durable and Khador jacks have some trouble hitting them (MAT6 hits DEF12 with 72.22%), if S&P isn't cast every turn. Casting S&P means of course less melee attacks for jacks.
The most dangerous models in the Khador list is probably Spriggan,  because it has bulldoze which can break Blaster lines. Combined with Vlad's Forced match feat (16” run), it can seriously expose my warcaster for Khador highly effective shooting if I’m not careful.

In short, this game excellent chance to test my MiMeMo list durability. ;)

Mercenary deployment:
I won the roll to go first, and chose to deploy and go first. 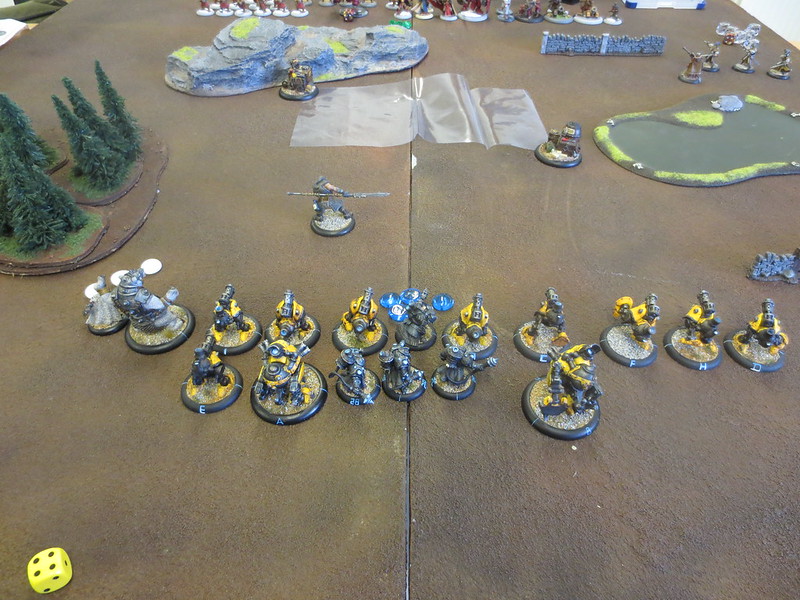 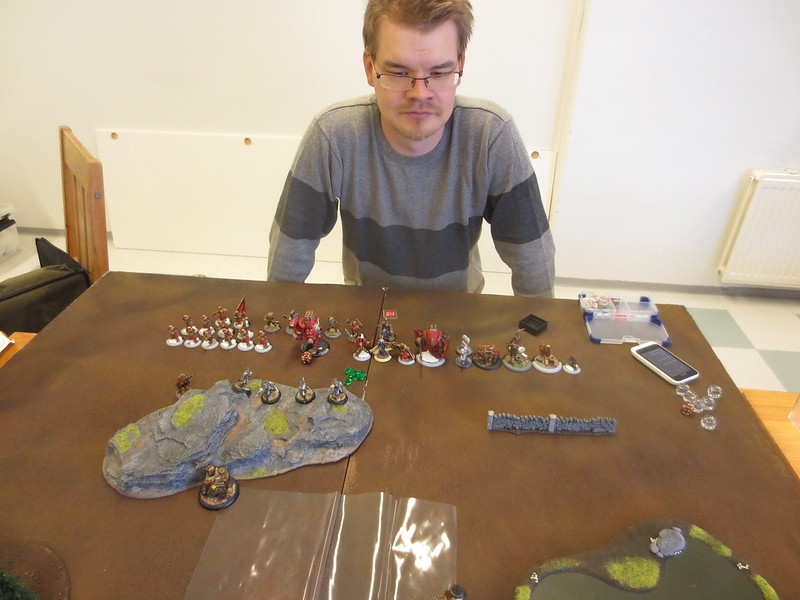 Mercenary Turn 1:
Assign three focus for Blasters. Gorten casts the Solid Ground spell and charges. The Bashers "help" Blasters to move forward by slamming them. Lug tries to throw a Blaster, but boosted double-handed throw misses DEF12. Gudrun advances in to the forest and prepares to engage the gun ma.. er Widowmakers. 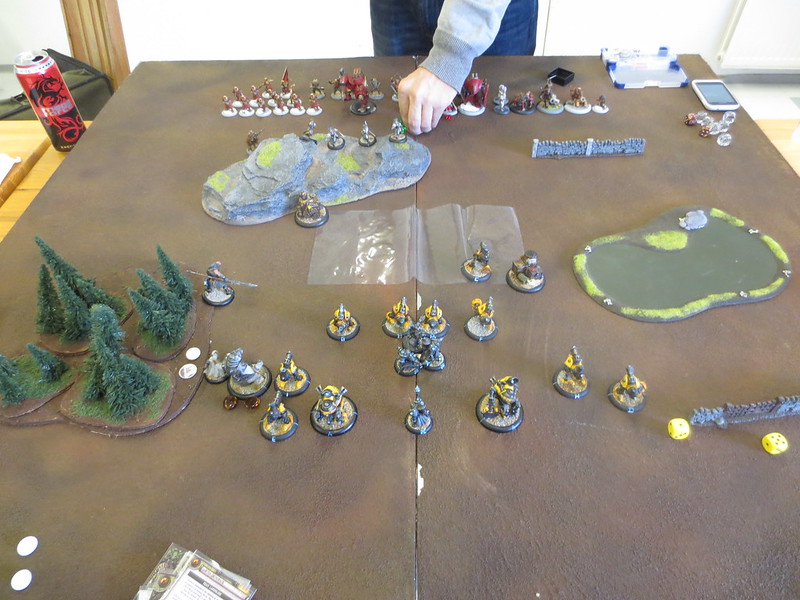 Khador Turn 1:
Aiyana manages to cast the kiss on the lead Blaster. Signs & Portents buffed Behemoth and Widowmaker shoot and the Blaster is badly hurt, but still functioning. Winter Guard Infantry (WGI) takes up defensive positions on the hill. 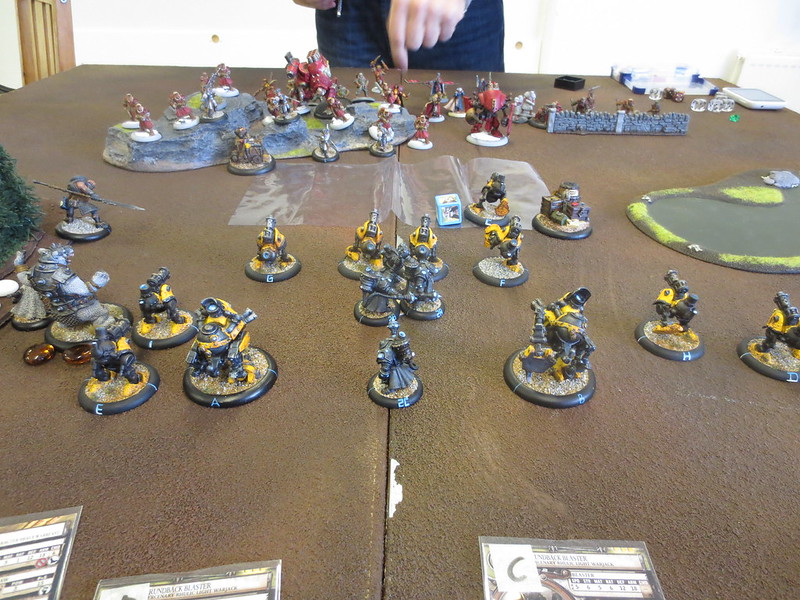 Mercenary Turn 2:
Time to retaliate. Assigning 4 focus to Blasters and upkeeping Solid Ground. Hitting DEF12+2 WGI isn't a problem, but them passing five tough rolls is. Gudrun charges the WGI, kills one and ties up several Widowmakers. Four Blasters move to the center of the table to contest zone next turn. 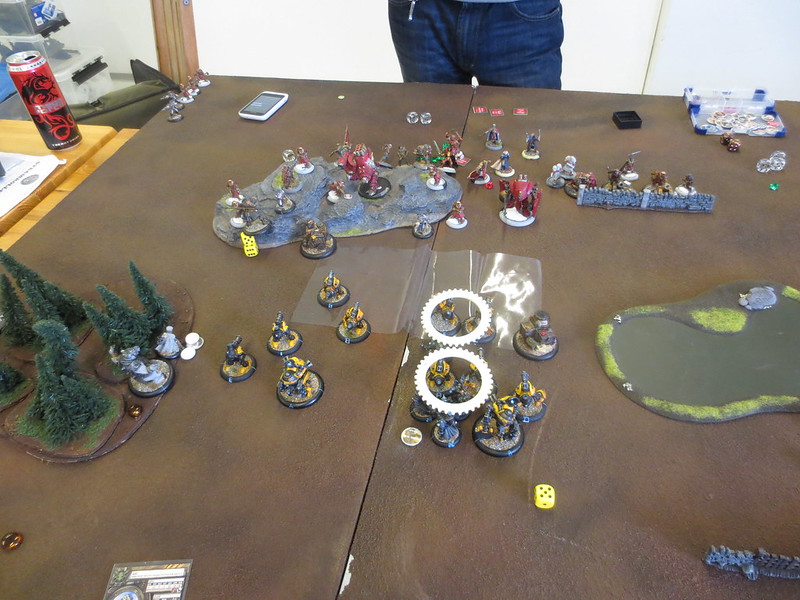 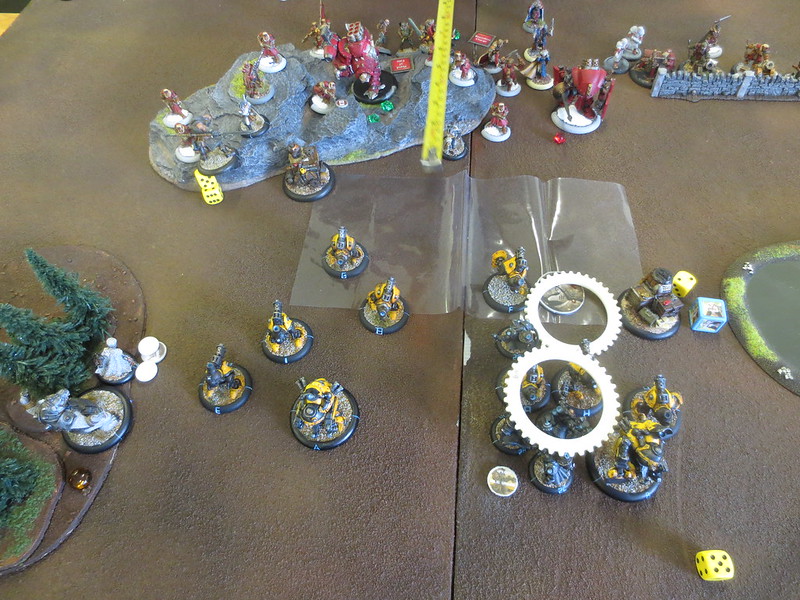 Predictably, Niko tries to destroy the objective and all contesting Blasters, but objective and two blaster (barely) survive the beatdown. 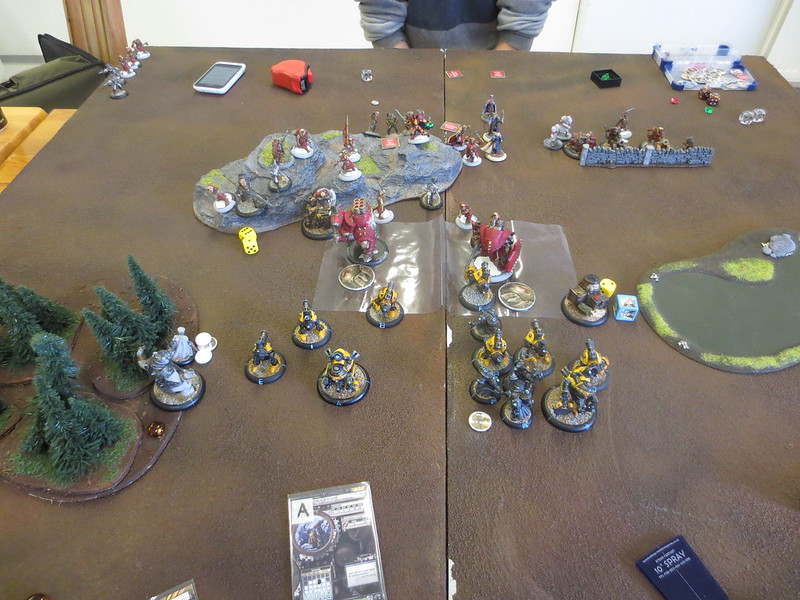 Mercenary turn 3:
Time to remove the WGI and Widowmakers. Gorten camps all focus and upkeeps Solid Ground.  Blasters move to open slam lanes for Bashers. Bashers slam both Khador warjacks and resulting collateral damage kills most of the surviving WGI and Widowmakers. Gorten moves to a safer position and casts rock wall in front of a Basher to protect it from the Behemoth. Brun and Lug move forward to destroy something important next turn. 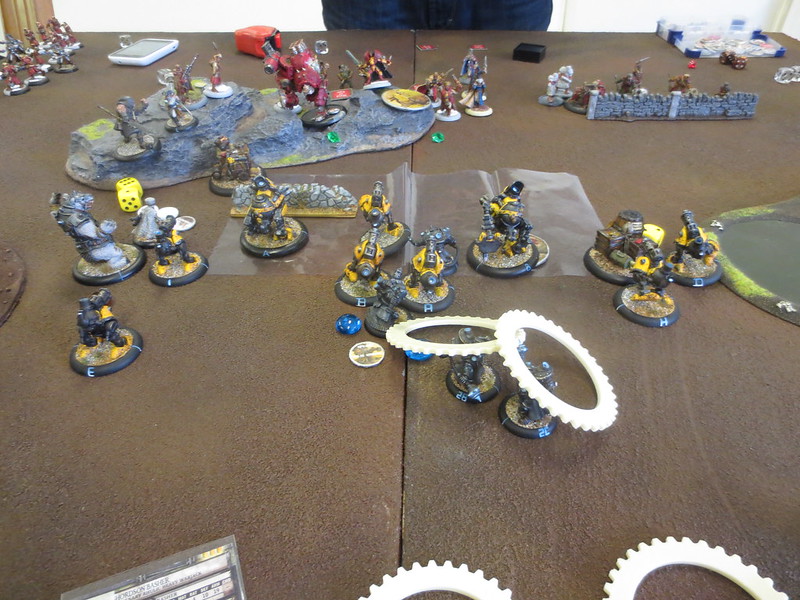 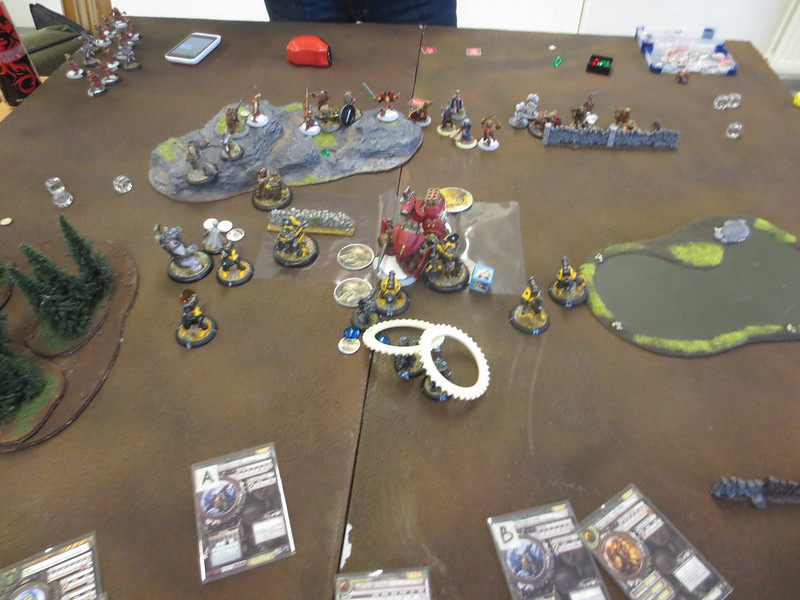 Mercenary turn 4:
Gorten has managed get so close to Vlad that assassination via Landslide feat is possible.  Assign 4 focus to Blasters and Solid ground is not upkeeped. Unfortunately, there are several Blaster wrecks in front of Gorten so I need to slam Spriggan out of the way to get close enough. Basher slams the Spriggan, but Niko points out that Basher moved only 2,7" so Spriggan isn't moved by the slam. My great assassination plan fails :(.
Remaining Tactical Arcanist Corps and Blasters move to base to base with Spriggan so that Gorten can escape without provoking a free strike. Blasters move to tie up Behemoth. Brun and Lug remove the other objective. 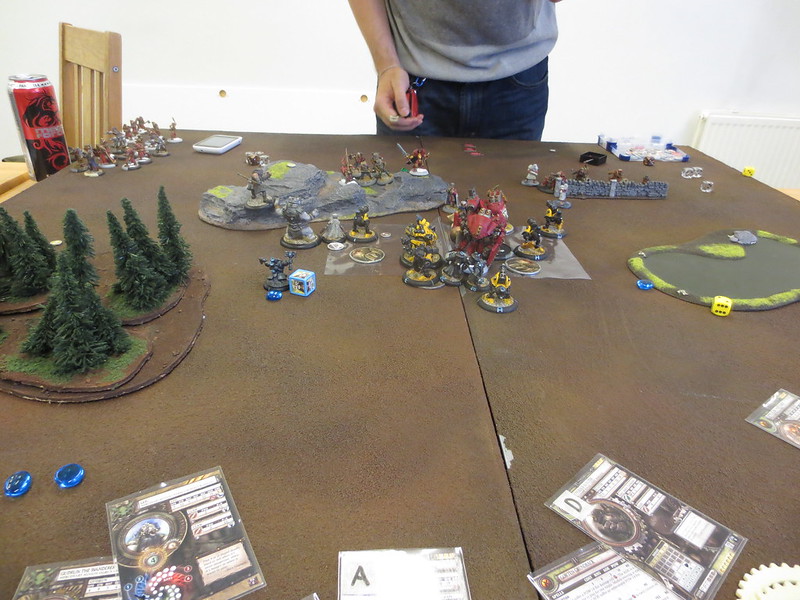 Khador turn 4:
Niko tries another assassination, but the timer runs of out for him. Mercenaries win by deathclock! My clock shows 15 minutes of remaining time. 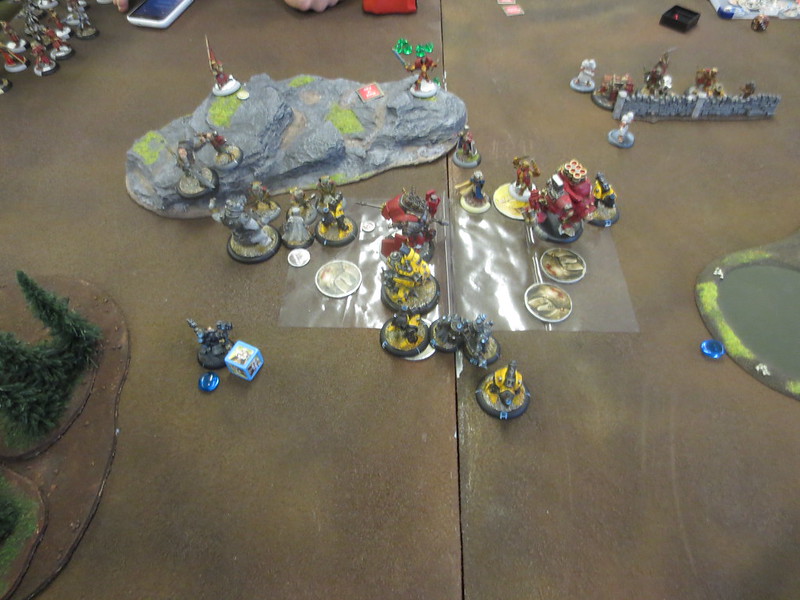 Post-game thoughts:
Even though I had a bad flu and made many, many mistakes, I really liked this match. The fact that I won without feating and against good defensive position is a sign that this has some serious potential.
Niko punished me for every mistake I made, but in all honesty could probably have played a little bit faster. Then again he played a gunline infantry list with multiple buffing and debuffing models. Playing a that kind of list quickly without mistakes takes a lot of practice. After the match, Niko said that he will try to donwnsize his infantry and squeeze in another bulldoze jack.
My biggest mistake was of course my hilarious assassination attempt during turn 4. What was I thinking! I can only hope that I remember to check the slam distance next time. The second biggest mistake was not double-checking the Blaster damage boxes during turn 3. Niko had an excellent chance to kill Gorten, which was completely preventable. I probably should have used the Gorten’s feat earlier to remove one Khador heavy, just to block this kind of assassination attempt.