Hi everyone! I’m Juho “Tanan” Auer and this is my 3rd warmachine miniature game battle report on this site. The lists below where done using www.forwardkommander.com .

About the lists:
I think that the Ossrum list above highlights the differences between Gorten "MiMeMo" (miserable meal mountain)  and Ossrum "MiMeMo". Gorten has the tools to bypass high ARM (Dual hand cannon, Molten metal, Strength of Granite) and high DEF (feat, Eruption). When I built my Gorten MiMeMo list I chose models that further enhance these abilities (multiple battlegroup melee heavies to bypass high ARM with Strengh of Granite, Brun&Lug bypass high ARM and high DEF etc.). Ossrum on the other hand doesn’t have innate tools to bypass high ARM or high DEF. I could choose models that would mitigate these weaknesses, but I feel that this isn’t the right way to play Ossrum (or warmachine in general). I think that Ossrum is best in scenario control (speed, bulldoze), anti-hordes (lower ARM in general and it’s easy to frenzy beasts with bulldoze) and assassination (snipe, energizer, feat) and that the list should enhance these traits.

I have mixed feelings from Ville's list, probably because I have love/hate relationship with Captain Allister Caine (also known as eCaine or Caine2). I mean, Caine is one of those casters that can during his feat turn, oneround a colossal or reliably kill a enemy warcaster from 22" away. During non-feat rounds, he removes enemy light infantry with frightening efficiency. While this works very well against most warmachine/hordes list (in current meta, most armies have only one heavy jack or colossal and a lot of infantry), it really struggles against high ARM armies. Most swan players try to mitigate this weakness by boosting Caine damage output even further by including models like Ragman and Aiyana & Holt. Ville has done the same by taking three Hunters and assigning them to Jakes and Junior warcaster.  Like I mentined before, I don't think that this is the right way to play warmachine.

Cygnar deployment:
I won the roll to go first, and chose to deploy second. 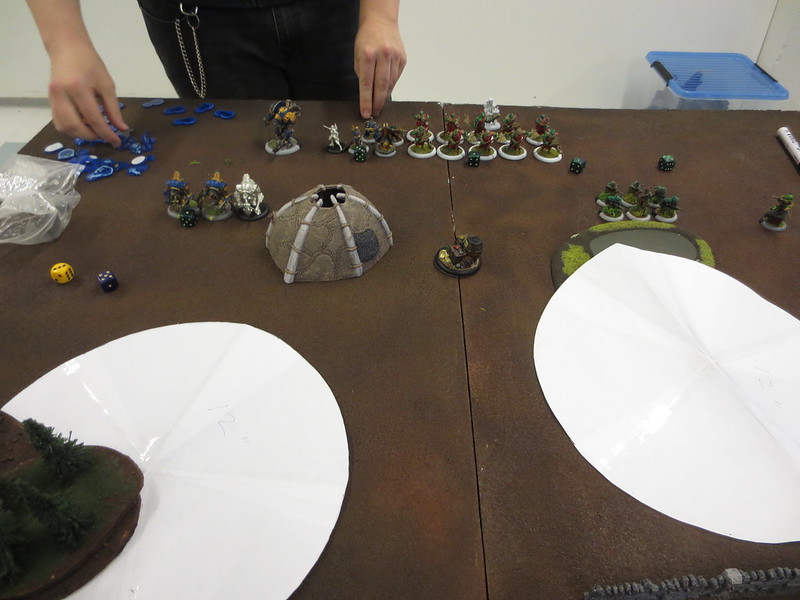 
I chose to go last and select the board edge, because the forest terrain party obscures the zone on my left. For those who are not familiar with warmachine, this kind of pocket is ideal for contesting a zone. I'm confident that four Blasters will be enough and Ville will not be able to win with control points. Three gunners are on the middle of the deployment where they can threaten any models that decides to advance more than 8" from their deployment zone. 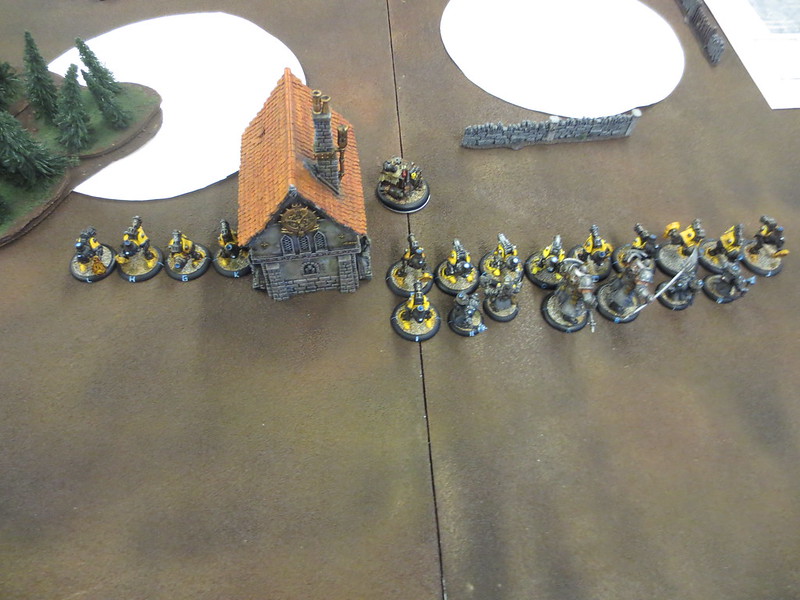 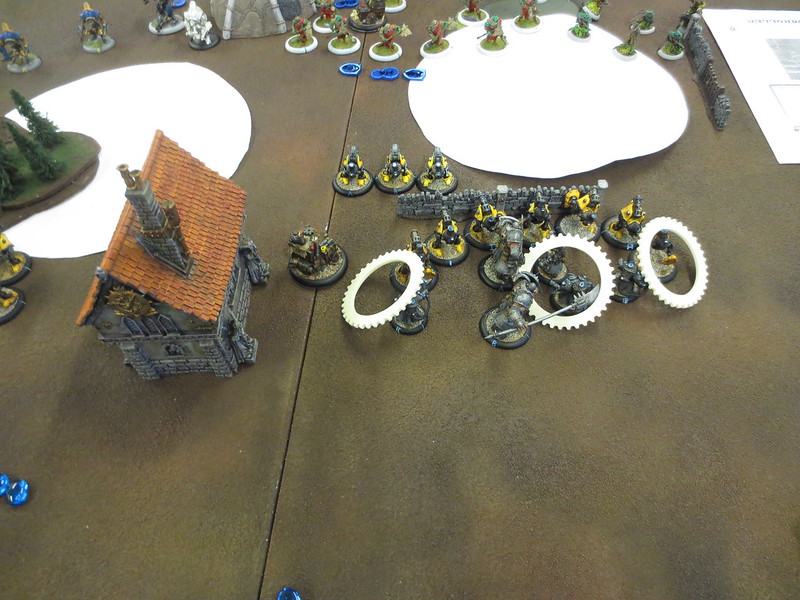 Cygnar Turn 2:
Caine, Jakes and Junior upkeep spells and Caine camps focus. The Boomhowler Co charge in and concentrated fire from Caine and Hunters destroy one Gunner and cripple two. Ol'Rowdy runs to the zone on my left. 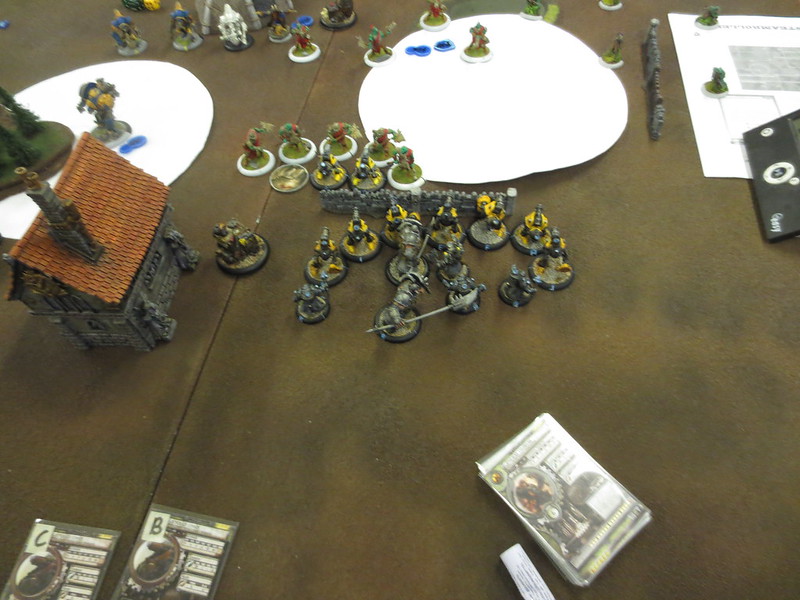 Mercenary Turn 2:
There are only five Boomhowler grunts and two rangers are on the rightmost zone, so I try to get some control points. Assign 2 focus for Blasters. Unfortunately, Blaster struggle to penetrate ARM16 and 5+ tough works far too many times. At the end of the shooting one Boomhowler grunt and one range remain on the zone. Ossrum is intimidated by Caine's threat range, runs toward my table edge and hides behind Bokurs. Four Blasters play hide-and-seek with Ol'Rowdy on the leftmost zone. 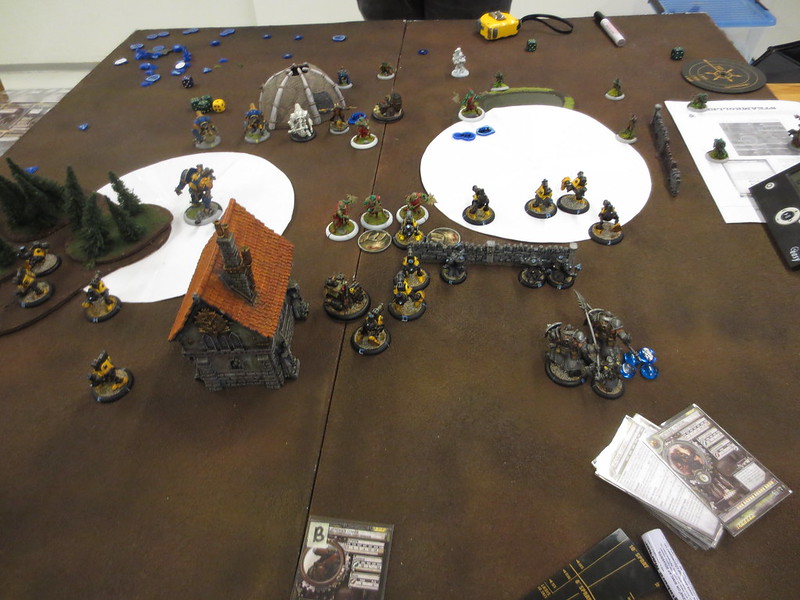 Caine upkeeps 'Blur' on himself, but drops 'Heightened reflexes' from Boomhowler Co. Jakes and Junior upkeep their spells. Ville measures Caine's control range many times, but finally decides that Ossrum's ARM21 and two Bokurs are too much for a reliable assassination run. Caine and Hunters perforate the last Gunner and two Blasters. 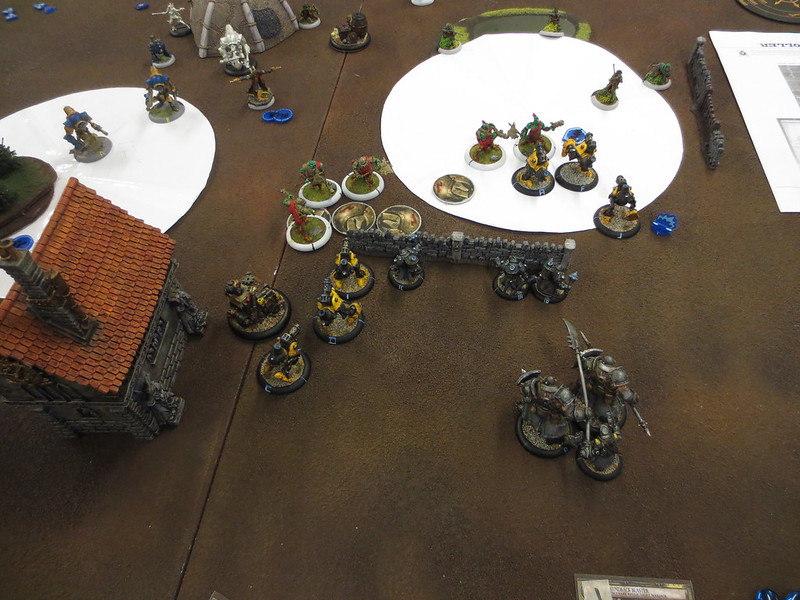 Mercenary Turn 3:
Caine came little too close, time for some shenanigans ;). Assign two focus for Blaster 'I' and four focus for other Blasters. Blasters C, D, F and J finally eliminate the Boomhowlers. Ossrum uses his feat the 'Perfect Plan'. Blaster 'A' runs in front of Caine. Thanks to Ossrum's feat 'Perfect Plan' Blaster 'I' is able to slam (wall and Blaster wrecks were blocking the slam movement) Blaster 'A' and Caine is knocked down by collateral hit. Tactical Arcanist Corps move up and kill Caine with flame blasts. 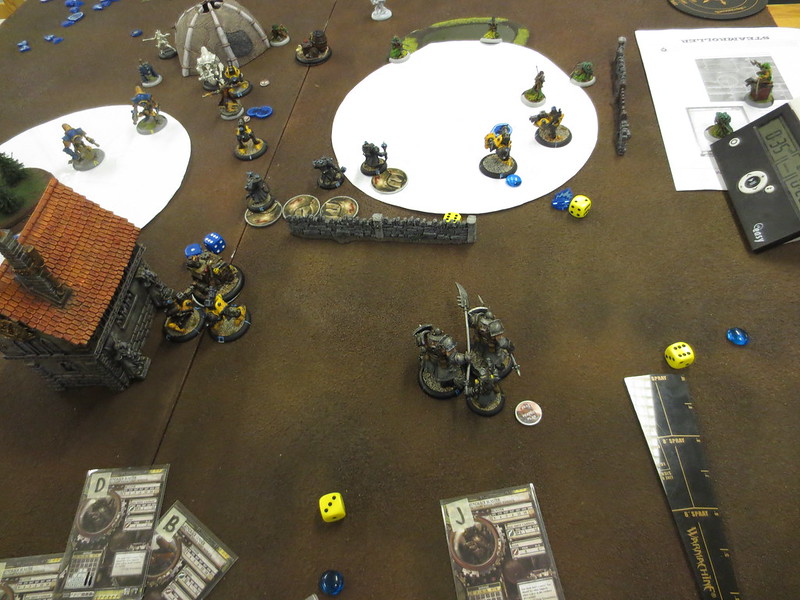 Post-game thoughts:
Overall, I think that "MiMeMo" is a pretty bad matchup for Caine. Ville also made numerous small mistakes throughout the match.  His biggest mistake was deploying Arcane shielded Ol'Rowdy on my left flank. That jack and spell would have been seriously needed in the rightmost zone. Another mistake was relying on 'Blur' for protection. If Caine had 'Arcane shield' or 'Heightened reflexes' he would have survived the assassination.
For my part, I think I didn't make big mistakes. Ossrum "MiMeMo" will grind any infantry to dust, even if that infantry is Boomhowler & Co. I overestimated my Blasters ability to remove the Boomhowlers and rangers during my second turn, but I didn't really lose anything so no harm done.